Are we too complacent?

Henry Porter, writing in The Observer on 8th September about the Snowden affair, calls the British people “complacent” in its attitude to secrecy. He is concerned that the BBC’s Today programme on the previous day did not cover the subject recently when he believed it should have been a leading item.

In the UK, as we hopefully begin the escape from one of the worst recessions in history and where wages are, Iike in the US, still falling behind prices despite renewed growth in the economy, there is a mistiness amongst the population that is likened to Huxley’s Brave New World – where many of us appear to be high (or low) on Soma.

The Soma of the 21st Century is, maybe understandably, related to wealth– the money we earn that gets us through life. It pays our bills, buys our food and clothing and shelter, pays our tax and is almost everything most people think of as their main route to wellbeing. For almost all, money seems to form the basis of our lives and engulfs our thinking.

For money appears to be at the heart of everything the 21st human believes in – lack of money effectively disenfranchises us from most of life’s gains. Lack of money dis-enables. Maslow got it right to a point. We are all focused on the lower levels of his hierarchy. The trouble is how enough of us penetrate the upper layers. 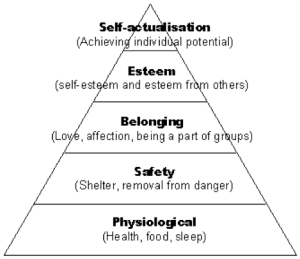 We seem to get the shelter and food parts, even the desire to belong and group ethics; but, once we get to esteem we believe that this relates to work and jobs and self-actualisation is well beyond almost anyone anyway. Working to the common good, for example, is maybe a stretch too far.

A recent survey shows that “only” 9% of us actively participate in civil society – working for civic pride – maybe being self-actualisers. The Charity Aid Foundation (CAF) found that just 9% of people give 66% of all the time and money to charities / not for profits in the UK. See report.

The “civic core”  – a concept first espoused by Mohan and Bulloch in 2012 – drives the charity sector. The “zero givers”, as the name suggests, relies on them to be the “do-gooders”.

I am reminded of the days when Schools’ Boards of Governors were obliged to meet with parents annually. I cannot remember one occasion when, I as one of the governors, was confronted by an audience larger than the school governors present. For a school with over 1,000 sets of parents and guardians, possibly 10 people would turn up. No wonder this annual ritual no longer exists. Most people want to engage with themselves and their families and not with the wider community – let the civic core do it.

This reflection on society may seem overly harsh but does shine a light on Henry Porter’s concerns about society being “complacent”. Except in times of abject misery – like a time of war – most of society is not complacent but reliant. Reliant means that the vast majority of people looks to the civic core to run the core of society.

CAF senses that much of this is down to time-poverty – or lack of time to commit to other things. Is this really true? Are 91% of the population lacking time – or is this an excuse? Maybe there is no sense of the Big Society that David Cameron no longer mentions. Maybe we are individualists that rely on the rest of society where it counts – where priorities like secrecy issues are well down the list.

Re-branding society is a challenge – a call to inaction or action?

Of course, 9% of the adult population actually represents a lot of people – around 9% of 50 million – which is 4.5 million.

According to CAF, 4.5 million are actively involved – the civic core – who are not so time sensitive. A high proportion, though, are over-65’s and there are many more women than men, less full-time employed, less young people.

The challenge to which Henry Porter alludes is how to galvanise sufficient of civil society to make a difference – in an age where not enough of us commit to anything other than ourselves or to our close kin and friends – or, maybe to the ultra-loose contacts on Facebook or Twitter, where a retweet has somehow become our idea of “campaigning” and close friends are indicated by the number following you on LinkedIn or Facebook.

An indication of this is an excellent article by none other than comedian Russell Brand writing in the Guardian – 13th September.

This article followed his “joke” at clothing firm Hugo Boss’s expense at the recent GQ Awards. Brand’s article is very well written but it is not the explanation for his comments that struck me, but that such an articulate and obviously concerned individual as Brand could say the following (and I quote at some length):

” …For example, if you can’t criticise Hugo Boss at the GQ awards because they own the event, do you think it is significant that energy companies donate to the Tory party? Will that affect government policy? Will the relationships that “politician of the year” Boris Johnson has with City bankers – he took many more meetings with them than public servants in his first term as mayor – influence the way he runs our capital?

Is it any wonder that Amazon, Vodafone and Starbucks avoid paying tax when they enjoy such cosy relationships with members of our government?

Ought we be concerned that our rights to protest are being continually eroded under the guise of enhancing our safety? Is there a relationship between proposed fracking in the UK, new laws that prohibit protest and the relationships between energy companies and our government?

I don’t know. I do have some good principles picked up that night that are generally applicable: the glamour and the glitz isn’t real, the party isn’t real, you have a much better time mucking around trying to make your mates laugh. I suppose that’s obvious. We all know it, we already know all the important stuff, like: don’t trust politicians, don’t trust big business and don’t trust the media. Trust your own heart and each another. When you take a breath and look away from the spectacle it’s amazing how absurd it seems when you look back.”

This may well be heartfelt but the essence of Brand’s words seem to me to be passive – a plea not to trust politicians, big companies and the media: heartfelt but inactive; a plea to do nothing – to be mournful, sad about the exploits of others but certainly no call to action. It is a call to inaction.

Maybe he is too busy to use his fame for good causes; maybe Russell Brand is more interested in having a few laughs with his mates. But, if someone as intelligent and thoughtful as Brand can’t rouse himself to do anything, to get involved somehow, what do we expect from the rest of the 91% (or even most of the 9% who, while involved, are certainly not out there campaigning or even showing annoyance or being pro-active)?

Finding the Catalyst for Action

When many don’t even vote or even consider it necessary, we know that democracy is not in a good state. But, voting is a passive demonstration even if critical to a democracy.

Most do not enter into a debate on issues outside their very close domain – sport and the weather seem the height of discussion in this country. Or, many get high on celebrity – X Factor or Big Brother. Former News of the World readers now tweet obscenities or attack feminists. So, issues like secrecy or tax havens (important to some) somehow seem trivial when prices are rising above the rate of wages and when good, full-time jobs are hard to obtain, when the trivial becomes all-important.

Maybe there is a catalyst out there that will encourage more to raise the temperature of debate and even to join in an active capacity. I have seen it at work. Organisations like Global Witness (where I was fortunate enough to work for close on five years) are full of young, impassioned, intelligent people who work hard to make real change happen. Whenever a job vacancy was advertised, there were often hundreds of applicants – from top quality people itching to get involved. There is a strong undercurrent of capability in the UK (and elsewhere) of well-educated, strong-willed people that want to pro-actively work for a better future, who are not complacent and not reliant on others.

Maybe we need to get them to talk more about what they do – not just to governments and politicians (who, in the short-term, are the change agents) but to young people in schools and universities – who are so focused on jobs and wealth (which is fine) but who may also want to ensure that society is properly balanced. This balance is not away from wealth creation (which will remain a fundamental underpinning of our society) but towards wealth creation that we all feel good about and where we do understand that money is not the only thing: wealth being quality not just quantity.

Maybe Russell Brand could get involved in this way – using his enormous power of communication to pro-actively make people want to get involved. From an inactive mournfulness to pro-active catalyst – a re-branding that makes sense.